November 03, 2019
This last month has been a blast, and I wanted to share the highlights with you, my loyal readers. So here, in chronological order, are the events that made my October a great one.

Kansas Authors' Club Convention: This took place the first weekend of the month right here in my hometown. Even though I have been a member for a few years, this was the first convention I had been to, mainly because I didn't want to pay for the convention and a hotel room. I am so glad I went, and I enjoyed it so much that I'll probably keep going every year even if it involves travel and a hotel. I learned so much from the sessions I went to about honing my craft that I came home eager to write more often. I also met some awesome fellow writers including the Poet Laureate Emeritus of Kansas. He was very fun to talk to and loves to eat bread, a fact I later wrote a poem about. 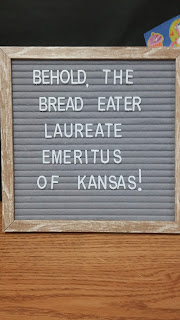 One of the sessions I participated in was a poetry and music event. Each poet read their piece once, then two jazz musicians improvised to the poem as the poet read it a second time. I was so nervous beforehand, especially when a scheduling conflict made it so I had to go first. However, it turned out great, and I got so many compliments from the other poets. Since I was first, I got to just sit back and enjoy all the other poems without having to worry about keeping track of when I needed to go up and read, or comparing my poems to those that were read before it.

Staff Social at Cedar Creek Pumpkin Patch: On the 15th, a group of people from my school met at a local pumpkin patch for a staff social. We did a hayrack ride, walked through a corn maze, took pictures, and petted animals in the petting zoo. There was also an opportunity to ride the Clysdale, but that was as I was about to leave for a meeting, so I didn't get to ride. However, I did get to watch some of my coworkers ride before I left. 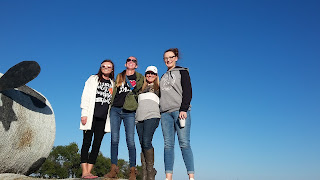 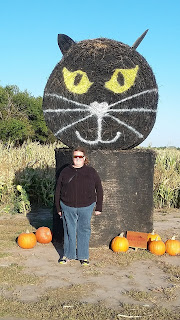 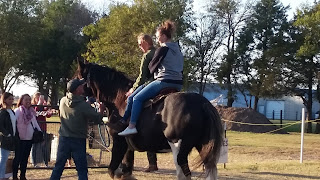 We Are Messengers Concert: On the 19th, the band We Are Messengers hosted a concert at a local church. Prior to the concert, they came and signed autographs at Mardel, a local Christian book store. I was able to meet them, get two signed CDs, and get a photo with the band. 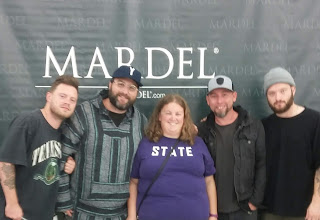 The concert itself was unlike any other one I've attended. In most concerts, the band comes out and plays a certain set of songs with some commentary in between the songs. When the opening act was on stage, this was how they conducted their portion of the concert. However, while We Are Messengers started their set like this, it didn't stay like this. Darren, the lead singer, said early on that they were not there to just play a set and leave. Instead, they wanted the Holy Spirit to lead them as they performed so the message they brought would really connect with the audience. They played some of their hits, some of their new music, and even a few hymns. Darren shared his experience talking to the protesters outside and prayed for the future of America. He informed the audience that he didn't know how long they would keep performing because they only want to keep doing so if it is what God calls them to do. They don't want to become so attached to the band that they keep going after they are no longer being effective messengers. The concert ended with the audience standing together in the center of the sanctuary with our arms around the people on either side of us as we sang the chorus of "Maybe it's Okay" over and over again.

K-State Beating Oklahoma: While some of my friends would disagree, this was a great football game. K-State was not expected to win, and sometimes that is exactly why they win. Oklahoma is a strong football team, but they have a tendency to underestimate the teams they are playing, and while that doesn't always result in them losing, in this case, it did. It also didn't help that when K-State upped their game, Oklahoma panicked and started making costly mistakes. Two Oklahoma penalties led to K-State touchdowns, and an attempt at a trick play put the ball right into the hands of a K-State defender, which soon led to a touchdown as well. The icing on the cake was an onside kick from Oklahoma that brushed the knee of one of their players before it had gone ten yards, resulting in K-State having possession of the ball. The game was thrilling, and I would have enjoyed it even if K-State had lost because they were playing so well.

Halloween: At my school, the staff dressed as Where's Waldo? characters with the principal dressed as Waldo. We enjoyed taking goofy photos before school started, and we confused the kids a bit since most of them were unfamiliar with the books. I got to see all the kids in their costumes, many of which I had known about for over a month. We didn't get any trick-or-treaters at my house, but that just means that I get the candy, so I'm glad I bought some I enjoy. 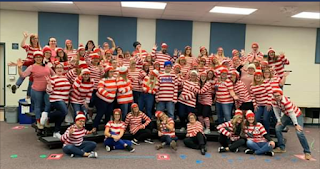 Popular posts from this blog

The verse quoted above is from a Psalm that beautifully depicts just how well we are known and loved by God. I particularly like this verse because it depicts not only God's provision for us before we were born, but also how He intricately formed us in His image. As a knitter myself, I am well aware of the time commitment and focus required to do it well, and it speaks of a God who cares enough about all of humanity to work so hard to create each one of us. My knowledge of knitting and the words of this passage are also the reason I am against two things that unfortunately are embraced by society, including some of my fellow Christians: abortion and transgenderism.

Abortion: My pro-life stance has been well documented in my posts "Choose Life" and "Unplanned" so I won't go into it much further here. How this verse relates to my stance is simple: …
Post a Comment
Read more

April 27, 2014
I am currently starting the fourth week of an online Bible study based on the book Living So That: Making Faith-Filled Choices in the Midst of a Messy Life by Wendy Blight. I was drawn to the study because of the title. When I first saw it, I thought, Living so that what? Where's the rest of the title? I now realize that the title was referring to those verses in the Bible that have the words so that in them.

The book has five chapters, each split into five parts and having a memory verse tied to the topic of that chapter. In the study, we are doing one chapter a week, and can split up the five readings for the week however we want to. I choose to read them on weekdays right after breakfast so that I start each work day with some time spent in God's Word.

Chapter One is "Jesus Came So That," and the memory verse is John 3:16. I figured, I know that verse in two languages. I got this. I didn't figure I would have any trouble with that week because I already knew w…
3 comments
Read more